The 2013 Local Food & Wine Challenge was a huge hit! It was hard to pick a favorite because all 12 wineries and 12 restaurants served their very best for this special evening! 375 guests tasted 12 pairings and voted for their favorite pairing. Five guests judges selected their best pairing in a blind tasting.

What an evening of wine, food, jazz and supporting our local FOOD Share!

Congrats to the winners and everyone who entered!

Tim
Posted by Sommelier Says at 8:45 AM 7 comments:

One of the fastest growing newer wineries on the central coast is digging it's roots deep into the history of this area's wine country with a purchase just announced today. Daou Vineyards has purchased what is largely considered the oldest existing modern winery in the Paso Robles Wine Growing Region.**

Daou's purchase of what was most recently called Twilight Cellars (previously Thunderbolt Junction) creates a cluster of 212 prime acres in the Adelaida district for winemaker Daniel Daou to what he loves to do best with....make great, hearty, bold wines. "This purchase will allow us to complete the planting of the entire mountain, provide our members with more privileges and continue the vision Dr. Hoffman and Andre Tchelistcheff had when they founded the winery in the early 60's thus preserving the bit of history" says owner George Daou.


**York Mountain Winery dates back to 1882, but is technically just adjacent to the Paso Robles AVA, in the York Mountain AVA.
Posted by Sommelier Says at 1:29 PM 1 comment:

Sommelier Service Question:
For my past birthday, my wife and I went to Las Vegas and she took me to dinner at a very nice hotel restaurant.

We brought along a bottle of Sea Smoke Ten to enjoy with our meal. But before we went to the restaurant, as I always do, I called ahead and asked about corkage fees etc. I was told that the wine could not be on their wine list and that it had to be approved ahead of time. In addition the corkage fee was $50.

I asked for it to be approved and they connected me with their Sommelier. I informed him of the wine and he said it is not on their list and it would be fine to bring to dinner.

We arrived at dinner; the Sommelier came over to our table, opened our wine and poured a glass for each of us. That was the last time we saw him. There were times during the dinner that our glasses were empty and wanted a refill, and we waited- no one came by. So I ended up refilling our glasses the entire dinner.

As a Certified Sommelier myself, I found this appalling. A $50 fee for opening our wine, the least that he could have done would be to refill our wine glasses. Mind you, we had an early seating (5:30) and the restaurant was not even ½ full.

Do you think I am over reacting? What do you expect from a Sommelier at a 5 star restaurant?
Posted by Sommelier Says at 9:50 AM No comments:

Yes last December Coombsville can stand be added to the AVAs of the Napa Valley.

This, 11,000-acre rural region just east of the city of Napa recently became the 16th AVA in Napa County. Named for Nathan Coombs, a prominent community leader and founder of Napa (1847), Coombsville has long been regarded as a superb spot for growing grapes but was somewhat out of the way from the mainstream wine-making centers.

Today more than 20 wineries are producing wines in Coombsville.

Generally hilly with vineyards at varying elevations, the area is protected from the wind by ridges, knolls and mountains, and the soil is a mix of ancient volcanic ash and rocky alluvial soils. The microclimates appear ideal for the production of elegant red wines.

You won't find big hotels, restaurants, shops or wineries in Coombsville. Instead, they will discover pastoral winding roads, a few houses dotted here and there, and select vineyard-wineries hidden from view.

There are also no crowds, lines of cars or limos — it's just Napa's backyard. The few visitors who discover Coombsville will be rewarded with a very mellow wine-tasting experience — by appointment only.

Here are some of the wineries in Coombsville to check out.

Meteor Vineyard is a gorgeous vineyard property off Third Street and produces some of the most outstanding cabernets in Napa Valley. Walk through the vineyards and experience the breadth and scope of Coombsville; you can see Mount George in the north, the Vaca Mountain range to the east and the Carneros region to the southwest. MeteorVineyard.com

Black Cat Vineyard, run by irrepressible owner/winemaker Tracey Reichow, is a spot to slow down and enjoy wine and conversation with the winemaker. It's her house, after all, and she treats visitors like long-lost friends. Blackcatvineyard.com


A recently published study by a wine distributor showed the current trends in wines sales in the United States this year.

The top five brands were Barefoot, Franzia, Yellow Tail, Kendall-Jackson and Sutter Home. Only the Kendall-Jackson cost more than $10 a bottle, and the Franzia (which comes in a five-liter box) was about $2 a bottle.

The top 10 brands were not natural or boutique or artisan, but made by the biggest multi-national companies in the world, including E&J Gallo (Barefoot and Gallo Family) and Constellation (Woodbridge and Clos du Bois).

Yes, this may not be an exact comparison, since the Spectator list measures "quality." But that itself is significant, since it says that the wine that most of us drink is inferior and doesn't cost enough. That's a stunning assumption to make, and exists almost nowhere but wine.

What are you drinking this year?

Tim
Posted by Sommelier Says at 10:40 AM No comments:

Chinese investors have bought five more Bordeaux chateaux in recent weeks, according to reports.
A further 12 are likely to be bought by Chinese buyers in the near future, the Bordeaux Chamber of Commerce says.
Chateau du Grand Moueys, a 170-hectare estate in Entre-Deux-Mers, was acquired last week by Hong Kong-based Zhang Jinshan.
Qu Nai Jie, president of the Haichang Group, has already snapped up nearby Chateau de Grand Branet as well as Chateau Branda, Chateau Laurette and Chateau Thebot. He is reportedly interested in more acquisitions.
Some Chinese owners devote their entire output to exports to China, but Grand Moueys will sell up to 20% of its wine in Europe and the US, according to an AFP report.
In a somewhat related news story: Bordeaux's classified growths have approved the first-ever standardized Chinese translation of their names, auction house Christie's has unveiled an official translation of each of the 61 chateaux in the 1855 classification, after 12 months of collaboration with the Medoc estates. 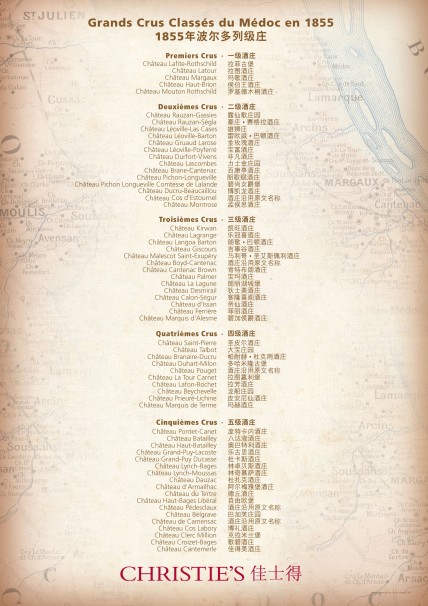 Christie's staff have worked with chateaux to agree on Chinese translations for their estate while others already had Chinese names. However, some chateaux including Cos d'Estournel have opted not to take a Chinese name.
The Chinese translations have been published on a poster, which will be unveiled to the Bordeaux trade during the 2012 En Primeur week.
Christie's hopes to produce similar translations for producers in Sauternes, Bordeaux's right bank and Burgundy in the future.
Posted by Sommelier Says at 12:09 PM 1 comment:

Sommelier Says
Timothy Robertson is a member of the Society of Wine Educators and a member of the United States Sommelier Association, and he has successfully completed the Sommelier Course given by the Court of Master Sommeliers.